Since the lightning rise of the Islamic State in 2014, law enforcement has scrambled to stop an endless array of plots. It is only now, more than four years after Abu Bakr al-Baghdadi declared his caliphate, that the cadence has finally slowed.

Islamic State attacks in the West fell steeply in 2018 compared with the previous four years, the first time the number has fallen since 2014. But the number of attempted attacks remained steady, suggesting that the group remains committed to carrying out catastrophic harm.

The difference, analysts say, is that law enforcement is increasingly foiling the plots.

The Islamic State remains the world’s deadliest terrorist organization, and its attacks are on the rise in places like Afghanistan and Iraq. But in the West, not only has the number of attacks plummeted, but the devastation inflicted by each has also declined. 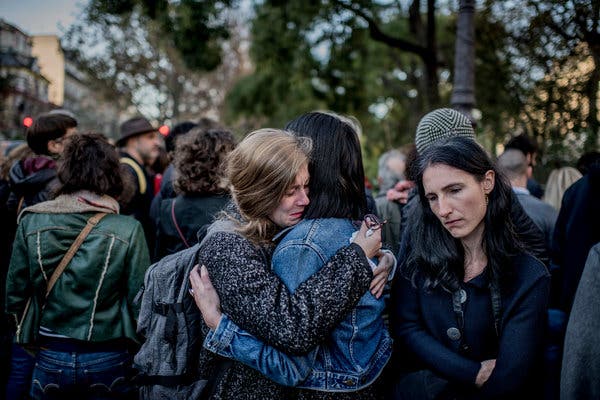 Mourners on the streets of Paris after 130 people were killed in an Islamic State attack in 2015.CreditTomas Munita for The New York Times

[The fight to retake the last vestige of the Islamic State’s caliphate in Iraq and Syria has begun.]

The Islamic State carried out 14 successful attacks in Europe and North America in 2015, 22 in 2016 and 27 in 2017, according to data collected by George Washington University’s Program on Extremism. But in the first eight months of this year, it only carried out four.

The scale of attacks has also fallen. The largest toll in a single attack fell from 130 in 2015, to 86 in 2016, to 22 at the pop concert in Manchester in 2017. So far in 2018, the worst single-day toll was in the aisles of a supermarket in Trèbes, France, where a man acting in the name of the Islamic State gunned down three people in March.

The Islamic State, also known as ISIS, has lost 99 percent of the land it once held in Iraq and Syria, and the fight to evict it from the last vestige started this week. Some analysts have linked the drop in activity to the loss of territory.

But the number of attempted attacks in Europe has remained unchanged, according to data collected by the Center for the Analysis of Terrorism in Paris. That data suggests that while the Islamic State’s capacity may have been diminished, its effort has not. 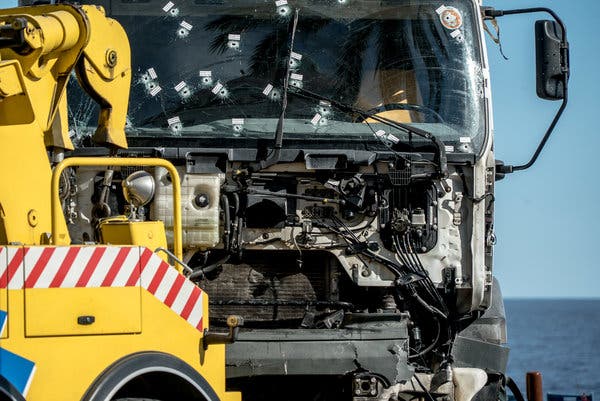 A jihadist loyal to the Islamic State killed 86 people in Nice in 2016 by plowing through a crowd in a 19-ton truck. Bullet holes riddled the truck’s windshield.CreditAndrew Testa for The New York Times

“We are able to conclude that there is no correlation between their military setbacks and the loss of territory and the intensity of the threat,” said Jean-Charles Brisard, the director of the Paris-based center. “Even if the Islamic State is losing both militarily and in terms of terrain, the ideology of ISIS remains present in the hearts of individuals who want to harm us.”

According to the center’s database, the Islamic State carried out 15 attacks last year in the 28 countries of the European Union. But another 47 plots were intercepted in the planning stages or thwarted during the execution. In 2016, there were 14 successful attacks while 40 were thwarted.

For the first part of 2018, the data collected by Mr. Brisard indicates that the number of foiled attacks has remained steady.

Facing intense public pressure to stop the attacks, Western law enforcement agencies have raised their game. Bill Roggio, a senior fellow at the Foundation for Defense of Democracies in Washington, said several advances had made them better at hunting terrorists: “Closer monitoring of social media. Better understanding of the networks. And better coordination with other countries.” 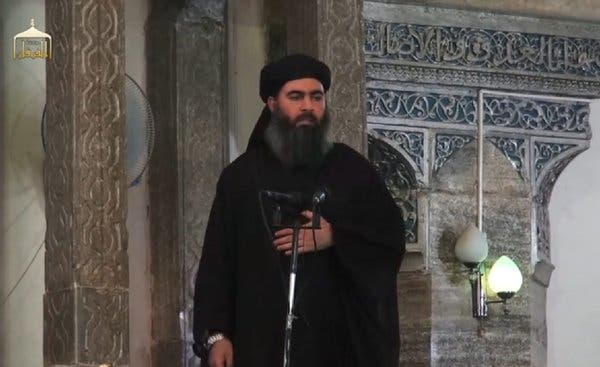 The Islamic State’s leader, Abu Bakr al-Baghdadi, declared a caliphate in 2014 and set off a spree of terrorist attacks around the world.

Electronic surveillance has been crucial.

Most of the attacks in 2016 and 2017 were carried out by people who were introduced to the Islamic State online and whose only connection to the group was a Wi-Fi signal. In a growing number of instances, they were directed by one of the group’s cyber-coaches — men based in Syria, Libya, Afghanistan and beyond — who guided them from the planning to the execution of a plot.

Law enforcement agencies have increasingly been able to infiltrate this online universe, analysts say, sometimes lurking in the Islamic State’s chat rooms on Telegram, the encrypted messaging platform that is the group’s preferred medium.

In 2016, a Toronto teenager, Abdulrahman El Bahnasawy, used the app to make contact with an Islamic State member who went by the screen name Kill Kuffars, meaning infidels. In a series of feverish chats, the two made plans to meet in New York City with the aim of carrying out a “Paris- or Brussels-like terrorist attack,” federal authorities said.

Mr. Bahnasawy recruited a third accomplice in the New York area, whom he also met on an encrypted app, and shipped 40 pounds of hydrogen peroxide, the raw ingredient used to make the explosive TATP, to the accomplice’s home address. They researched renting a cabin in the woods to assemble the bomb and swapped maps of the New York subway, with arrows indicating where the explosives should be placed. 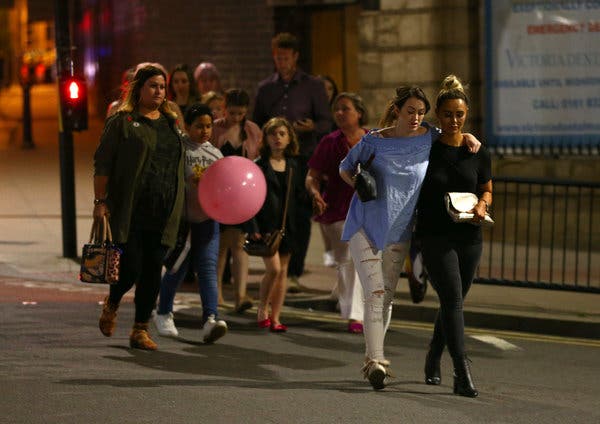 An Islamic State suicide bomber killed 22 people, many of them teenage girls, at an Ariana Grande concert in Manchester, England, in 2017.CreditDave Thompson/Getty Images

But the New York accomplice was an undercover F.B.I. agent. Mr. Bahnasawy was arrested, days after his 18th birthday, in a hotel parking lot just before reaching the city.

With each arrest, the authorities seize the suspects’ cellphones and electronics, download their contacts and study their chats, turning one arrest into an opportunity to roll up an entire network. For more than a year after Mr. Bahnasawy’s arrest, the authorities kept his imprisonment secret in an effort not to tip off Kill Kuffars. Kill Kuffars, a 19-year-old American living in Pakistan whose real name is Talha Haroon, was eventually arrested.

As terrorist attacks have declined, arrests have soared. In 2014, there were 395 terrorism-related arrests in Europe. In 2016 and 2017 there were more than 700, according to data collected by Kacper Rekawek, who heads the defense and security program at Globsec, a Slovakia-based research institute.

In the United States, more than half of the 77 people charged with Islamic State-related crimes in recent years involved investigations using an undercover informer, according to Seamus Hughes, the deputy director of the Program on Extremism.

The increased arrests have led to pushback from civil liberties groups and accusations of entrapment. Mr. Bahnasawy’s family insists that the F.B.I. manipulated him into carrying out acts he would not have done on his own, pointing out that he has been diagnosed with bipolar disorder and was taking antipsychotic medication at the time of his arrest.

Whatever their flaws, the successes in Europe and North America have not been replicated elsewhere.

In Afghanistan, Islamic State attacks are on the rise, while in Southeast Asia and West Africa, the authorities are struggling to contain the group, according to Mr. Roggio. In Syria and Iraq, despite the loss of territory, the Islamic State still has tens of thousands of members, according to estimates by the United Nations and the Pentagon’s inspector general, and attacks have increased in three Iraqi provinces.

And although successful attacks are down in Europe, recently foiled plots show that the group has come dangerously close to carrying out a sophisticated mass killing.

In Cologne, Germany, in June, biochemical experts wearing protective suits seized 84 milligrams of ricin from a Tunisian man who had been communicating with the Islamic State on Telegram. He is believed to be the first jihadist in the West to produce the highly toxic biological agent, according to a report by the West Point Combating Terrorism Center, but may not be the last. 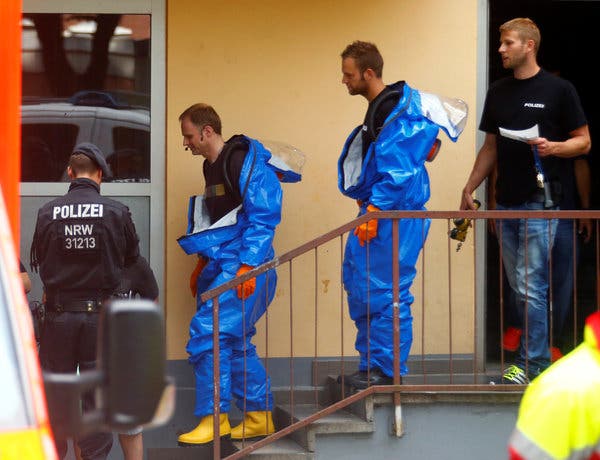 Biochemical experts raided an apartment in Cologne, Germany, in June, seizing 84 milligrams of ricin from a Tunisian man who had been communicating with the Islamic State.CreditThilo Schmuelgen/Reuters

A dose of ricin the size of a grain of salt can kill an adult.

The Islamic State encourages followers to use less sophisticated weapons as well — a knife, a car, even a rock — which makes thwarting terrorist attacks a relentless exercise in surveillance.

Alagie Touray, a 21-year-old Gambian, washed up on Italy’s shore last year and was offered a room in a refugee center in Pozzuoli. With the stipend of 77 euros, around $90, from the Italian government, he bought a new Samsung phone and installed the Telegram app. At a table in the refugee center’s lunchroom, he recorded and uploaded a video pledge of allegiance to the Islamic State leader, Abu Bakr al-Baghdadi.

He sent the video to an Islamic State handler in Libya, who instructed him “to get a car and use it to drive it into people,” according to the transcript of a preliminary investigation hearing before the Naples District Court.

The plot began to unravel when Italian authorities received a tip that the video’s author could be in Naples, said Claudio Galzerano, director for counterterrorism at the Central Directorate of Italy’s Prevention Police.

They homed in on the refugee center, matching the furnishings in the cafeteria with the background in the video. Then they found Mr. Touray, and spent several days following him to determine whether he was alone or part of a broader network.

Ten days after recording the video, Mr. Touray was arrested while leaving a mosque in the nearby town of Licola.

During questioning, he insisted that the pledge was a “joke” and that he didn’t even known how to drive.

However, investigators point to the WhatsApp message he sent a friend in Gambia two days after he uploaded his oath.